For an integral ecology 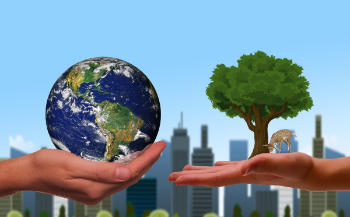 To speak of integral ecology is to recognize that everything is interconnected. We live in Kairos time with dreams and hopes, with the Church on the move. But we also live in a time of crisis and conflict, where life is threatened in the Amazon region.

Indigenous peoples, Afro-descendants and traditional communities are exploited by the capitalist system that steals the riches of their territories. They are killing the dreams of BIEN VIVIR. In Tupi Guarani we speak of “Ñande Rekoha” (the mother-earth). The cry coming from the forest is: “we want to live”.

According to scientific studies, the environment suffers from five major actions of illegal exploitation by large companies with the support of the Brazilian government: 1. illegal mining; 2. destruction of forests and illegal logging; 3. agro-industrial activities with the use of pesticides; 4. abusive exploitation of medicinal plants; 5. government omission of supervision and social security of the peoples;

The Synod of the Amazon affirms that “the Church commits itself to be an ally of the Amazonian peoples in denouncing attacks on the life of the indigenous communities, the projects that affect the environment, the lack of demarcation of their territories, as well as the economic model of predatory and ecocidal development.”(Nr. 46).

“Integral ecology is not one path among many that the Church can choose for the future in this territory, it is the only possible path, because there is no other viable route for saving the region.” (Nr. 67). An ecological conversion is urgently needed in order to avoid ecological sin (cf. Nr. 82).

“One of the most glorious pages of the Amazon has been written by the martyrs… This Synod admires and recognizes those who struggle, at great risk to their own lives, to defend the existence of this territory.” (Nr. 16).

In the face of so much violence and now with the deaths due to the pandemic and the evident omission on the part of the governments, we as SVD’s have to:

I invite everyone to participate and to strengthen the local JPIC and the VIVAT International Network, together with other entities and social movements in the Common House for BIEN VIVIR.

The Arnoldus Family Story, Vol.3, No.6 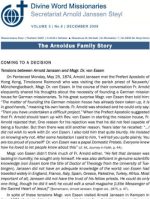 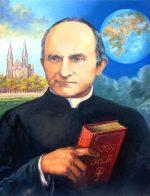 Today’s Europe and the SVD. Reflections on Mission. 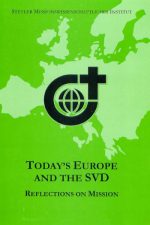