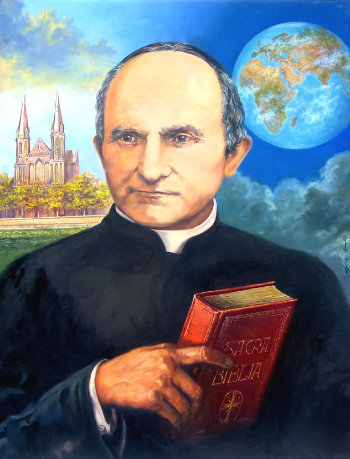 (Some thoughts collated by P. Peter Dusicka SVD, January 2021 for the celebration of the Sunday of the Word ofGod)

The painting of Arnold Janssen, prepared for his canonization on Oct 5th 2003, shows our Founder holding a book in his right hand. What kind of book is it? It is not the book of SVD Constitutions, but the Bible. On the cover page of this book, we may see an inscription in Latin: Sacra Biblia. The symbol of the Bible highlights one of the fundamental pillars of the spirituality of Saint Arnold, concretely – his deep relationship to the Word of God, understood as the Holy Scripture.

Fr. Alt writes: “In contrast to his letters, when he gave conferences Arnold Janssen quoted copiously from the Scriptures. He must have had a very good concordance because with the text he always gave the chapter and verse, sometimes just a series of biblical sources without text.” (Alt, Arnold Janssen, Journey in Faith, p. 732).

As the SVD gradually got even more and more new missions we were no longer diocesan congregation; we became pontifical. Therefore the SVD needed an approval from Rome. Thus Arnold Janssen submitted the Constitutions, known as 1898 Rule, to Rome.

Alt writes: “It must have been clear to him (Arnold), though, that the 1898 Rule was diametrically opposed to the Normae, and that far beyond the external form and arrangement. Everything that was not purely legal and normative in nature was to be excluded, meaning therefore, all dogmatic teaching, all spiritual motivation, all Scripture texts, quotations from the Fathers of the Church and theologians, all inspirational texts and overly detailed regulations for daily life. Arnold Janssen had wanted to breathe a religious spirit into the letters of the law. He had pointed out the religious motivation and goals of the Society. He had written extensively on the veneration of the Trinity, on the name of the Society and on the veneration of the Holy Spirit.” (Alt, Arnold Janssen, Journey in Faith, p. 758).

Thus Arnold had to admit: “The censor had found our Rule greatly edifying and there were no difficulties in the substantial matters. But the abundance of Scripture texts, as well as the division into constitutions and statutes was contrary to existing usage.” (Alt, Arnold Janssen, Journey in Faith, p. 756).

And: “I have now received the Rule back from the secretary of the examining Commission, Mgr. Melata. He has deleted all Scripture quotations and all that is more doctrinal, but has not required any changes. I am to send it in again afterwards. Unfortunately so much has been deleted, |…| that even in essential matters hardly more than dry bones are left over.” (Alt, Arnold Janssen, Journey in Faith, p. 758).

The abundance of Scripture texts in Constitutions was contrary to the style of such a document at that time!

How lucky we are that the things has changed. In our Constitutions, deeply rooted in the Bible, we read: “As co-workers of Christ we seek inspiration in the word of God. By reading the scriptures we open our hearts to the promptings of the Holy Spirit who helps us grasp the word, make it our own and announce it to the world.” (C. 407).

“Arnold had not seen the development of the catholic biblical movement that took place, above all, during the second half of the 20th century and which was magnificently expressed in the Constitution Dei Verbum of the Second Vatican Council. It would have given him great satisfaction since he was a great lover of the Word of God and a good connoisseur of the Bible, which he always held in the highest esteem. This can already be seen in Steyl’s first statutes of 1876: “The purpose of our Congregation is to spread the Word of God on earth …”. Proof of his knowledge of the Bible is the profusion of biblical quotations that he used in his lectures and writings. Precisely one of his permanent concerns was “that his people were familiar with the Book of books.”

The return of the Church to the Bible by the Second Vatican Council had a profound impact on the Congregations founded by him. From beginning to end the new Constitutions of the Divine Word Missionaries demonstrate this:

“It is by listening to the word of God and living it that we become co-workers of the Divine Word” (c. 106). It is characteristic of the first part entitled “a Community Sharing in the Mission of the Divine Word.”

But the second part of the Constitutions speaks of the “Life in Union with the Divine Word”. This implies the constant encounter with the word of God and the progressive renewal starting from this word. It is the spiritual legacy of our Founder who had the firm conviction that all missionaries must live from the Word of God in order to proclaim it. In his Spiritual Testament he expressed it: “What great content the words of Sacred Scripture have! Hence, the members of the Society will highly appreciate them, venerate them and be propagators of its message.” 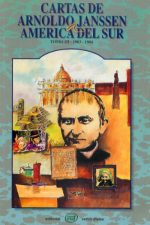 Blessed are the Missionaries

The Arnoldus Family Story, Vol.2, No.7 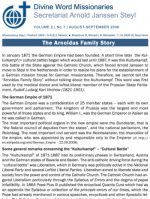 In search of the Gospel of joy, justice and peace!