My devotion to Saint Joseph

My parents chose the name “Joseph” as my middle name, and therefore St. Joseph is my natural second Patron Saint. Considering that my first Patron, St. Vladimir, is not very popular or well known in Poland and Poles have rather negative associations with this name, the name Joseph evokes much more sympathy and is known all over the world. During my stay in Argentina I used the name Józef (Jose) and those who knew me at that time remember me instead as Józef (Jose).

The second important element concerning my devotion to St Joseph is my birthplace, whose patron saint is St. Joseph. I come from Kalisz, where the cult of St Joseph was established in the 17th century and developed significantly in the next century. It was quenched during the partitions of Poland and world wars and developed again after World War II. The diocese of my birth was the Diocese of Wloclawek, whose patron saint, due to the earlier presence of the shrine of St. Joseph in Kalisz, is St. Joseph.

During World War II, some priests prisoners of the concentration camps in Sachsenhausen and Dachau entrusted their lives to St Joseph of Kalisz. The motivators were priests from the Diocese of Wloclawek. As Allied forces approached the Dachau concentration camp, the prisoners were aware that the Germans would try to kill them before American troops’ arrival. Therefore, about eight hundred priests and lay prisoners began a novena to St. Joseph of Kalisz. They asked Saint Joseph to save the lives of the Dachau camp prisoners. Their novena ended with a solemn act of dedication to St. Joseph on April 22, 1945, a week before the liberation of the camp by American troops. The American troops liberated the Dachau concentration camp a few hours before Himmler planned to murder the prisoners.

These priests interpreted the circumstances of the Dachau concentration camp’s liberation as a miraculous intervention by St. Joseph, which others might call a coincidence. Along with the act of dedication to St. Joseph they made promises, one of which was to make an annual pilgrimage to the Shrine of St Joseph in Kalisz, which they started in 1948. The Sanctuary of St. Joseph in Kalisz naturally became the national sanctuary. Thanks to the establishment of the Polish Josephological Studies in Kalisz in 1969 and St. John Paul II’s pilgrimage in 1997. These occasions raised the status of this sanctuary and contributed to its development. The above circumstances are a cause of joy and pride for me and contribute to my greater veneration for St Joseph.

Providentially, St Joseph is the patron saint of the SVD Polish Province. I have lived for nineteen years in the religious house of Gorna Grupa, whose patron saint is also St Joseph. Therefore, St Joseph’s cult is continuously present in our community life.

Our congregation’s spirituality is also connected with St. Joseph as the foster father, protector and guardian of the Son of God to whom our Constitutions’ prologue refers to the Word of God. The continually growing veneration of St. Joseph in the Church creates a good atmosphere. It motivates us to venerate him more and reflect on his life and role in the history of salvation. As a religious brother, Saint Joseph is also remarkably close to me as the patron saint of artisans or workers, with whom the life and ministry of religious brothers are also identified. His hidden and silent life is very much associated with the reality of our life as Religious Brothers.

Certainly, St. Joseph, meek, humble, and obedient to the will of God, can also be an excellent model in the search for ways and means to proclaim the Gospel in the modern world, which does not necessarily have to be expressed in significant initiatives, highly publicized and described, but rather in the quiet search for God’s will and fulfilling it through daily fidelity to one’s duties. There is no need for grandiose and costly initiatives, which often fail to produce tangible religious benefits in practice. However, it is usually enough to build on what is contained in the Gospels and what emerges from the spirituality and history of the Church. To seek and do God’s will as a means of salvation for ourselves and others refers the teaching of many saints, including our Saint Arnold Janssen’s life and teaching.

Like St. Joseph, Arnold was above all humble and submitted himself to God’s will. He persevered in realizing his lofty plans, which turned out to be following God’s design. We, too, should clearly show our attitude that we are believers and authentic worshippers of God. We care about the growth of God’s glory and the salvation of those among whom Divine Providence has placed us. Such an attitude is required of us by our religious vows. But also among us exists the attitude of entitlement, seeking comfortable living conditions and independence from superiors.

Commitment to man’s material and intellectual development, to equality and justice in the world should be the only means leading to God, who is our ultimate goal. For “our light may shine truly before others,” we need to look to the example of St. Joseph. We seek his intercession in our concern for the growth of the Kingdom of God. It is like the “seed thrown into the ground” so that it may have favorable conditions for growth, often independent of our efforts. Indeed, it would help us return to a greater love for the Eucharist. Our Constitutions say, “Eucharist should be celebrated daily and in common,” and which, as the Church teaches, “is the source and summit of the whole Christian life.” 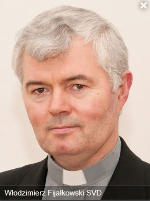 Brother Józef Fijałkowski Włodzimierz, SVD, was born in 1961 in the town of Kalisz. According to historical notes it is the oldest town in Poland. He is the sixth child of the family. After primary and secondary school he worked as a car mechanic and truck driver for three years. At that time political changes began in Eastern Europe and he joined the labor movement “Solidarity”. He served two years of military service in the air force. After two years of military service in the air force, he joined the Congregation of the Divine Word as a Brother. After perpetual vows he worked for three years in Argentina. He then took a one-year English course in the United States and returned to Poland. Since then he went to work in the economy.