A land, with history and faces to embrace.

With great pleasure I am able to share something of my experiences in these almost two years of Episcopal ministry in the new mission that the Church has entrusted to me.
On August 31, 2019, I was ordained Coadjutor Bishop of the Diocese of Añatuya, in the Province of Santiago del Estero, Argentina. And after two months I am appointed Diocesan Bishop.
The Diocese of Añatuya was created in 1961, large in area, almost 70,000 km2., The population concentrated in some small cities and mostly scattered in rural communities that total approximately 200,000 inhabitants. It is one of the poorest dioceses in the country and therefore pastoral action has had a marked emphasis on human and social advancement since its inception.
It has 23 parishes, more than 350 chapels or community centers, 20 schools and colleges, job training centers, radios, homes for children – elderly – disabled, dining rooms, wardrobes, pharmacies, etc., all these spaces and projects are served by 35 priests, 60 religious, many lay catechists, promoters, animators, etc.
Popular religiosity is very evident in its devotions and practices, it constitutes a true reservoir of life and spirituality transmitted from generation to generation.
There are numerous challenges that in the history of the Diocese has attempted to respond to them: Eradication of ranches and the construction of houses. Being a very arid area, isolated and devoid of water, water channels, cisterns, boreholes, roads were built. Given the lack of opportunities for local development and scarcity of resources, cooperatives and community productive enterprises were promoted. Due to the lack of education and health care, due to the absence of the State, various sectors responded with educational, health and labor proposals. Today new challenges are added such as the accompaniment and containment of addicted people, women victims of violence, children with malnutrition, etc.
This brushstroke with some features can contextualize where I was invited to assume pastoral care as Bishop, land and faces that I want to embrace and where I want to give myself entirely, sharing life, faith and mission with these new brothers and sisters that the Lord gives me.

I came to offer my missionary heart

Before continuing to delve into the reflection, I want to share that when I received the news of this appointment, I lived it with uncertainty for not being in the foreseeable projects  that I envisioned within my religious province. But I also assumed it with openness and serenity, knowing that God is the one who is directing history and that if he asked me for this step now, I could count on his grace.

Of course, everything was very mobilizing and at the same time very fast, it was a great detachment and many things changed radically for me. I cannot deny that I felt the pain because suddenly I was in a new place, unknown to me, without SVD community and with all the questions and insecurities typical of a beginner and a learner. But what is always preached about availability, promptness, detachment, when the mission demands us and we discern it as the will of God mediated by the Church, now touched me in my own flesh with a new scope.
Another reason for accepting was knowing that Pope Francis wanted for this Diocese someone who came from a religious and missionary family; I felt that Añatuya was a purely missionary Diocese, with a beautiful trajectory where other missionaries gave and achieved a lot.
A Diocese of humble and hospitable people, hungry for God and seeking a dignified life for all, was presented to me as my measure and style, there were no excuses or justification to reject the request. That is why when arriving to this new mission I wanted to offer my missionary heart to be here and now and be a witness of Jesus Christ.

Today I feel that the years lived in the Congregation have made me very happy, I gather and treasure countless experiences that I will never stop being grateful for, they have provided me with everything that today I can display in this local church and above all they have imbued me in a spirituality that sustains and nurtures me.
Since I was in formation, I began appropriating that expression of ours of living the paschal exodus to the peripheries and borders, then growing in the prophetic dialogue with the various interlocutors, becoming transformative missionary disciples together with the companions on the journey, putting first of all the last. All this lived from a mystique that takes root in the One and Triune God, from the incarnation model of the Word, from the centrality of the Word of God and the experience of interculturality in the dynamism of the Spirit.
Today I think and feel from this rich Arnoldian heritage and I cannot but impregnate my style of being and build a christian church from it, it is like something that I cannot hide and that I transmit it in my gestures, words and attitudes.
In my Episcopal shield I was also able to capture a Trinitarian symbolic background and my motto is precisely the missionary mandate of Jesus to his disciples “Go and proclaim the Gospel” – Mt. 28,19 – which connects us with the vocation of all the baptized and with the reason for being and existing of the Church.

8 VERBS TO LINK  THE MISSION

I choose 8 verbs for the reflection, although in the last General Chapter of the Divine Word, took them out, we cannot disassociate them from the inheritance of the founding generation of our congregations that laid foundations and sowed the seed that later germinated and multiplied.

By conjugating these verbs with the grammar that Arnoldo and José, Mothers María and Josefa, Micaela and many others teach us, we are walking together, step by step, side by side, from grace to grace.

He was born on August 12, 1968 in the city of Córdoba. He entered the Congregation of the Divine Word Missionaries in 1987, in 1996 he made perpetual vows. He received priestly ordination in 1997
He served in different apostolates as parish priest, formator and novice teachers in Argentina and Paraguay. He also accompanied the pastoral work in Maracaibo, Venezuela, at the beginning of the SVD presence in that country.
He was Provincial Superior of the South Argentine Province of the Divine Word Missionaries until July 19, 2019, when the Holy Father Francisco appointed them coadjutor bishop of the diocese of Añatuya, in the province of Santiago del Estero, Argentina, and then diocesan bishop. 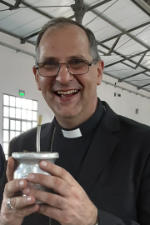 Bishop José Luis Corral SVD was born on August 12, 1968 in the city of Córdoba. He entered the Congregation of the Divine Word Missionaries in 1987, in 1996 he made perpetual vows. He received priestly ordination in 1997
He served in different apostolates as parish priest, formator and novice teachers in Argentina and Paraguay. He also accompanied the pastoral work in Maracaibo, Venezuela, at the beginning of the SVD presence in that country.
He was Provincial Superior of the South Argentine Province of the Divine Word Missionaries until July 19, 2019, when the Holy Father Francisco appointed them coadjutor bishop of the diocese of Añatuya, in the province of Santiago del Estero, Argentina, and then diocesan bishop.