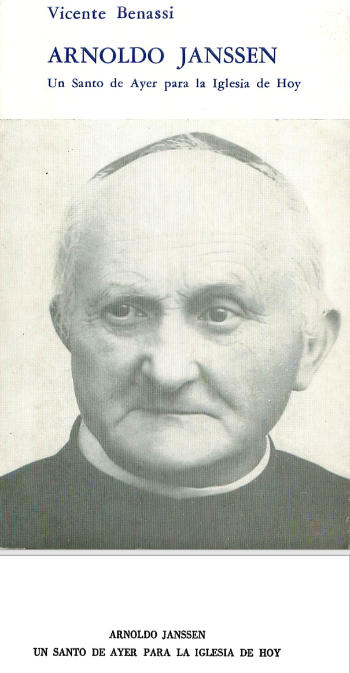 PrevPortrait of A Dedicated Woman Hendrina Stenmanns Co-Foundress of the Missionary Sisters Servants of the Holy Spirit
Faithful to the Spirit – Blessed Maria Helena 1852-1900Next
Disponible en .pdf
Leer

On January 15, 1909, at one in the morning in Steyl (Holland), Arnold Janssen finished his earthly journey. He was then 71 years old 48 of these years were consecrated to the priesthood, and some 33 as the Founder of the Congregation of the Divine Word, popularly known as Missionaries of Steyl.

Those who knew Janssen knew — sensed — the possibility that they were dealing with a saint. Almost 70 years after Janssen’s death, the Church officially recognized the heroic character of his virtue, as well as the authentic nature of his Christian life, of his entire and unconditional response to God’s call.

Arnold Janssen was a typical European saint. Born just a few kilometers from the German-Dutch border, he founded the first missionary house in Steyl, then he was active in Prussia, always urged by the need not to stay within the narrow limits of a country. Being a missionary in his homeland, he prepared envoys for the whole world, with a spiritual openness that, in the context of his time, may seem like stubbornness, when in reality it was providential foresight.

The pages of this book are intended to serve as a small guide to make the unique and edifying life and work of Arnold Janssen more understandable. Our brief biographical profile contains data and documentary references that adhere to the extensive scientific biography written by Father Fritz Bornemann. This work is characterized by the objective information of the citations of the writings of Janssen.

Prayer for the Intercession of Arnold Janssen 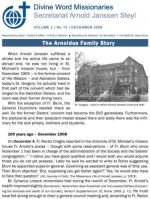 Prayer for Victims of Domestic Violence

The Arnoldus Family Story, Vol.1, No.2 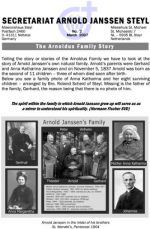