Personally, I admire the construction of bridges. They fascinate with their capacity to connect in spite of difficult conditions. Thanks to the bridges, the abysses are arched, the opposite riverbanks are linked and communication is facilitated. The bridge builders do a good job.

Our last General Chapter’s Statement in nr. 33 offers several suggestions for our commitment concerning living in our communities. And “to become bridge builders” is the key for our interaction with others. Building the bridges not of wood, nor of iron, but with words. 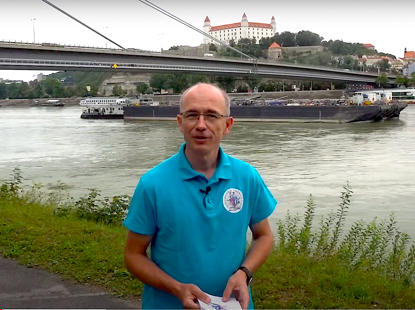 I would say, we need principally three types of words that would help us being bridge builders. First, “basic” words, words of our daily human communication. Pope Francis uses to repeat it quite often that we use in our daily communication words like “thanks”, “sorry”, “please”. This is the basis. Second, more “solid” words, words of human interaction, words of exchange that help us to know each other more profoundly: words of mutual sharing, words of one’s own life experiences, capacity to talk but also to listen to the difficulties of others and their struggles. Talk and listen to. And trying to comprehend. Third and final, we need “sacred words”, the words of the Scripture that we pray together, reflect and read together – in the form of bible sharing, or lectio divina, or during the retreat… Because the word of the Scripture are “lamp on our paths” (Ps 119:105), that will enlighten and will help us to build from our communities places warm and hospitable, both for the confreres and for occasional incomers.

When speaking to the young people gathered during the last World Youth Day in Panama – in January 2019 – Pope Francis exhorted them to become bridge builders, not the builders of walls; by the way, an idea that he repeats often. He said the following: “…the devil, the father of lies, always prefers divided people, at odds with each other. He is the master of the division. He is afraid of people who learn to work together.” Then he addressed the present young people and he said: “You want to be bridge builders. What do you want to be?” Their answer was: “Builders of bridges”. Now, what would be my personal answer on this question; what do I want to be in my community?

His country of origin and of the first assignment is Slovakia. He entered the novitiate of the Society of Divine Word in 1995 and professed his first vows a year after. In June 2002 he was ordained a priest and started to work in one of SVD parishes in Slovakia. In 2004, he was sent for further studies at the Pontifical Gregorian University in Rome. From 2007 to 2012, he worked again in Slovakia as a prefect of seminarians. Contemporary, he has begun lecturing New Testament subjects at the Faculty of Theology in Bratislava. In 2015, he concluded a three-year doctoral study in biblical theology at the Pontifical Gregorian University. By that time, he was appointed the general coordinator of the Biblical Apostolate in SVD. Among others, he is entrusted with the organization of the two-month residential course Dei Verbum at the Centro Ad Gentes in Nemi, designed for those involved in biblical animation and pastoral care.