The African Philosophy of Ubuntu and Mission

‘I Am Because We Are’

As we are in the month of October dedicated to the missions  my reflections were based on the word Ubuntu and for me another word for mission is Ubuntu.
The above word has a very rich meaning especially in the context of our world today as we are slowly coming out of a terrible pandemic that caused major economic disparities.

In Western philosophy, Rene Descarte’s saying, “I think, therefore I am,” is perhaps the foundation of how we often conceptualize the sense of self. But The African philosophy of— a concept in which our sense of self is shaped by our relationships with other people. It’s a way of living that begins with the starting point that “I am” only because “we are.”, basically meaning that you are because of the others,”  In practice, ubuntu means believing the common bonds within a group are more important than any individual arguments and divisions within it.

The spirit of the Mission is relationship and ubutu means relationship that is empowering and compassionate.
Here is how Anglican BishopTutu from South Africa explained the concept: “Africans have a thing called ubuntu. We believe that a person is a person through other persons. That my humanity is caught up, bound up, inextricably, with yours. When I dehumanize you, I dehumanize myself. The solitary human being is a contradiction in terms. Therefore you seek to work for the common good because your humanity comes into its own in community, in belonging.”  This idea also extends to our relationships with the non-human world of rivers, plants and animals. We as missionaries, this is what we are called to do, missioned for the common good of the people whom we are serving.

In the message of his holiness Pope Francis for this second  covid 19 affected world mission day 2021, we can notice the trace of  this wisdom of ubuntu,
“In these days of pandemic, when there is a temptation to disguise and justify indifference and apathy in the name of healthy social distancing, there is urgent need for the mission of compassion, which can make that necessary distancing an opportunity for encounter, and care.”

Quoting from his latest encyclical, “To be on mission is to be willing to think as Christ does, to believe with him that those around us are also my brothers and sisters. May his compassionate love touch our hearts and make us all true missionary disciples.”  “ Unless we recover the shared passion to create a community of belonging and solidarity worthy of our time, our energy and our resources, the global illusion that misled us will collapse and leave many in the grip of anguish and emptiness. Nor should we naively refuse to recognize that “obsession with a consumerist lifestyle, above all when few people are capable of maintaining it, can only lead to violence and mutual destruction”. The notion of “every man for himself” will rapidly degenerate into a free-for-all that would prove worse than any pandemic. (Fratelli Tutti, 36).

The theme of this year’s World Mission Day “What we have seen and heard” (Acts 4:20), is a summons to each of us to “own” and to bring to others what we bear in our hearts. This mission has always been the hallmark of the Church, for “she exists to evangelize” (SAINT PAUL VI, Evangelii Nuntiandi, 14).  By its very nature, the life of faith calls for a growing openness to embracing everyone, everywhere. Everyone’s destinies are intertwined.

Turning towards Ubuntu after COVID-19 is an opportunity for us all to participate in the mission of Christ. Most people in South Africa supported the temporary suspension of some of their human rights in the fight against COVID-19. Ubuntu encourages a more encompassing sense of responsibility, solidarity, and mutual sustenance. An insistence on responsibility lies at the heart of Ubuntu, as it demands both recognition of belonging and the performing of duties as an ethical being. As Justice Edwin Cameron has argued, “Ubuntu can be understood as an inclusive concept of humanity that facilitates the building of our future on respect, tolerance and ‘delight in our diversity”
ubuntu is said to include the following values: communality, respect, dignity, value, acceptance, sharing, co-responsibility, humaneness, social justice, fairness, personhood, morality, group solidarity, compassion, joy, love, fulfilment and so on.

I personally think, the African philosophy meaning of Ubutu, brings out the best meaning of Mission and relationships. I would like to conclude this article with a poem clearing explaining the meaning of Ubuntu taken from the collections of the Philosophy poems by fidelpoet.

A Poem on Ubuntu

I am because we are
The notion that runs in the blood of us Africans
Whether conscious or unconscious blood is thicker than water
Its an ideal left to us by our ancestors
An expensive inheritance
An ideal greater than water itself
Humanity towards one another, Agape!
A bond sharing that connects all humanity
Feelings of compassion and tolerance
Its the perception of oneness
Driven forward by feelings of unity
A philosophy of sweet love
Deeper than the oceans because,
I am because we are
To forgive when wronged
To believe in everyone’s abilities and success
Tolerance brings love and hope because
We are because I am
To eat from the same plate
To drink beer in the same cup
To love your foes, to give your last cent to the pauper
Because I am because we are
Its and indigenous philosophy. 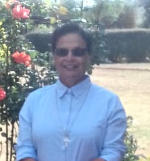 Sr. Marita Kurian, SSpS is a missionary in the Botswana-South Africa Region and is a member of the Ave Maria Pastoral Centre team in the Diocese of Tzaneen, South Africa. She was a secondary school teacher in Botswana before being transferred to South Africa and is a teacher by profession.