With his 78 years of life, 50 as a priest and 23 as a bishop, we are on a great missionary pilgrimage. Life is a gift from God. It must be used, lived and celebrated so that it is useful to Society, for a better world. In my case, it is at the service of the mission, of the Church that is: GOING OUT. Make life something not for oneself, but for you brothers and sisters.

I was born in a small town called Cascalho, in Cordeirópolis – Saint Paul Brasil. I spent my childhood with my parents. The devout Christians that they were made me Christian. I was baptised, made my first communion and confirmation. I was a normal child who was brought up in the countryside. Then one day a missionary father of the Divine Word took me to the seminary (Father Anthony Klein).

At the Araraquara seminary I did the four years of school. I learned discipline,fraternal lifestyle, love for the things of God. I went to secondary school in Ponta Grossa, Parana. I had a hard time with Latin. But I found a good atmosphere that helped me continue my studies, which were not always easy. From there there was a huge change. I went to the big city of São Paulo, where I lived my time as a novice. It was a time of many novelties. The grace to enter into the spirituality of the missionary family. Get in touch with the missionaries of the Divine Word, get to know the Congregation of missionaries, whose founder was Saint Arnold Janssen. To understand human and Christian values in the light of the Word of God, both in silence and prayer, in community life and in the first steps of pastoral work. 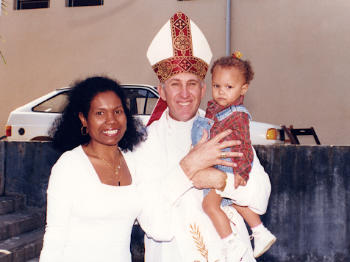 Soon after, I entered the academic world at the Philosophy Faculty. During the week I studied a lot, with the duties of fraternal comunity life, then on the weekends, visiting the people of greater Sao Paulo, entering families and communities, learning to be a missionary. — And the time of theology, 4 years studying the Bible, knowing the history of the Church and delving into the richness of the life of the Church and always more open to missionary action. I was lucky to persevere, always looking at the example of the missionary brothers, in prayer and at work, in a missionary coexistence and missionary family. As for the Fathers, they were the best, seeing the love they expressed for the Congregation, for the Church and the joy in the Mission. I saw many missionaries pass through the Seminary, always very enthusiastic about missionary life.

The first 15 years as a priest, I was always accompanied by the priests and missionary brothers. From then on, taking on more demanding responsibilities. In the greater Sao Paulo, two years in the Agua Rasa neighborhood. In the interior, three years in the city of Monte Alto and nine years in Araraquara. Then I was called to missionary work in the region of Vale do Ribeira, Sanctuary of Bom Jesus for 7 years. Always facing more challenges, through prayer and fraternal coexistence with confrares in pastoral and missionary work.

And 5 more years at the Major Seminary, SP, where I celebrated my jubilee (25 years) as a missionary priest, when Divine Providence took me to a “Renewal course in Rome. It was four months of missionary evaluation. I was called and appointed bishop for the Diocese of Registry, Vale do Ribeira, SP. Life is the school of learning. You make your way. We find challenges, “trials”, but much more joy in missionary work. We always have to cultivate being and doing. As the bird cannot fly with only one wing, so the missionary´s spirituality has to open and free to seek God’s world which makes the world missionary. My episcopal motto, “launch the nets”, makes me renew every day my willingness to put time, my health, the gifts received and the strength of God in me for the service of the mission, and the service of the brothers. I have realized that each person, with his work and his life, can be new life for the Kingdom to come. No matter where you live or what work you do, it is always time to evangelize, in all places. WE MUST ALWAYS LISTEN TO THE MASTER WHO CALLS US AGAIN.

When I passed through Bolzano (1988), in northern Italy, I received a gift that I carry with me, an icon of Saint Joseph Freinademetz, the great SVD missionary from China. It is in the episcopal chapel. It helps me a lot to be and do mission through prayer, fraternal coexistence and missionary ministry. I remember with gratitude and joy the time I spent among the people, in the communities of the periphery and the countryside, in the riverside communities of the Ribeira de Iguape River, in the indigenous and quilombolas communities. I see everything as a blessing from God in my missionary life. To be a bridge between brothers and sisters in the path of life. With the Virgin Mary who always “leads us to Jesus”, so that we can also bring him to others. To be a missionary is to be at the service of all, especially the smallest, the most suffered and marked by pain, poverty and abandonment.

Bishop José Luiz Bertanha, SVD, was born in Cordeirópolis, state of S. Paulo, on August 9, 1942. He took his perpetual vows on August 8, 1971 and was ordained priest on December 18, 1971. He was appointed second bishop of Registro by Pope John Paul II on May 26, 1998, when he was pastor of the Senhor Bom Jesus de Iguape Shrine, in the same diocese. He was president of the Regional Missionary Council of the Southern Region of the National Conference of Bishops of Brazil. He was at the head of the Diocese of Registro for almost twenty years, resigning in 2018. He continued to reside in the diocese, where he collaborates as bishop emeritus