In 1879, Joseph Freinademetz set out from Steyl to China with one single aim: to save souls for heaven. Over the years, he understood that announcing Jesus Christ was necessary to undergo a complete transformation, especially an inner one. Commenting that he was already dressing like the Chinese, he wrote: “The main thing remains to be done: the transformation of the inner man, the study of the Chinese world view, of Chinese customs and practices, of the Chinese character and Chinese psychology. That is not the work of a day, nor even of a year; neither does it take place without many a painful operation”. He already sensed this painful operation, as necessary in his first contacts with the Chinese people. It required a long process of insertion into the Chinese culture and mentality. Such a strenuous process led him to abandon the western stereotypes and prejudices regarding other peoples.

The life of Joseph Freinademetz is an example of a process of conversion of a missionary and personal transformation experienced in contact with the people. Through many years of immersion in China, his view of the Chinese people and their culture changed. He acquired a new understanding of being a missionary. Although no such concept exists at that time, his life and mission were an exemplary expression of prophetic dialogue.

Today, the Congregations (SVD, SSpS, SSpSAP) founded by St. Arnold Janssen come from a vast array of ethnic identities and cultures. We carry out a wide variety of apostolates in all continents and among many cultures. We are working in situations where religious and cultural pluralism is an integral part of social reality. Consequently, we experienced the urgency to discover adequate methods of proclaiming the Gospel in pluralistic contexts.

The mission is not possible without dialogue in its various dimensions (cultural, political, etc.). Notably, the interreligious dialogue in its varied forms has shown that a good relationship between religions is fundamental for peace between peoples and nations. Authentic dialogue presupposes the acceptance of the coexistence of different faiths with goodwill and not resentment. Dialogue and mission can only take place in an attitude of humility. Their main objective is not to convert or attack others and impose one religion or eliminate another. The actual aim of the dialogue is to share beliefs and collaborate mutually. It is possible when beliefs are truly interiorized and accepted. Doing so can result in positive and changing consequences in the lives of the people and societies.

There are two complementary actions in mission: proclamation without imposition and dialogue without renouncing our faith. The proclamation of Jesus Christ does not exclude a privileged moment of learning with people who follow other religious traditions. Indeed, other religions can awaken us to essential elements of our faith that have been forgotten or marginalized.

Some years ago, addressing religious men and women, Pope Francis said: “I hope you ‘awaken the world’ because the characteristic note of consecrated life is prophecy”. He also mentioned that one of the roles of prophecy is to discern and denounce the evil of sin and injustices. The other is to keep alive the utopia and create “alternate places” where the Gospel approach of self-giving, fraternity, embracing differences, and love can thrive.

Prophecy is an integral part of the Church’s mission. It denounces what is wrong and proposes alternatives that seek to overcome injustices. We are called to play a prophetic role in the world in a triple dimension. One dimension is to denounce what threatens the people’s dignity and the abuses committed against the poor. The other seeks to mobilize energies to promote initiatives or support existing ones that create fair and fraternal alternatives. And finally, renouncing privileges and positions of power to give credibility to our mission.

Prophetic dialogue is not a new missionary strategy but a way of being. It is the existential translation of one of the central elements of the Christian faith: to die for oneself so that others might have life and life in abundance. In prophetic dialogue, the primary purpose is to inspire others by the witness of life so that they can make their own way to Jesus Christ. As members of the Arnoldus Family, living prophetic dialogue is our way to collaborate with the Church to search for answers for the thirst of the Kingdom present in every person. We reach out to others in their hunger for God, their longing for inclusion in their different groups or cultures. We journey with and support those thirsty for justice and peace for the poor and marginalized and the thirst for brotherhood among the believers of various religions.

Living among the Chinese, Joseph Freinademetz grew in respect and appreciation for their culture and became a committed missionary. In one of his letters, he remarks: “Now that I no longer have so much difficulty with the language and I know the people and Chinese customs, I consider China as my homeland… I love China and the Chinese, and I would willingly die a thousand deaths for them… I am now more Chinese than Tyrolese, and I would like to remain Chinese also in heaven”. We, members of the Arnoldus Family, are called to discover, in the diverse contexts of the contemporary world where we live and work, that without an attitude of closeness, empathy, and listening, it is not possible to cultivate and to live prophetic dialogue.

Father José Antunes da Silva was born in Portugal. He was ordained a SVD priest in 1984. From 1986 to 1989 he was a missionary in Ghana. He studied Religious Sciences in the United States from 1990 to 1992. He was responsible for the work with lay missionaries and director of the newspaper “Contact” from 2003 to 2007. From 2007 to 2012 he became the provincial of the Portuguese province, being elected general councillor in the general chapter of 2012 and vice-superior general of the Congregation of the Divine Word in 2018.

Setting sail on the digital sea

My devotion to Saint Joseph 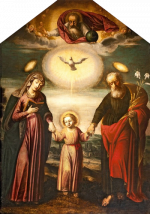