SSpS Missionaries Mobilize to the Refugees

Formed by people with different backgrounds and years  of experience with refugees, the organization  „Platform Refugee Concerns Europe“, based in Wittem Monastery (Netherlands) has been in existence since 2020.

In March 2021, in view of the upcoming elections, the national action in the Netherlands „Lopend Vuur“ (Running Fire) was initiated to raise awareness about the refugee issue throughout the country. 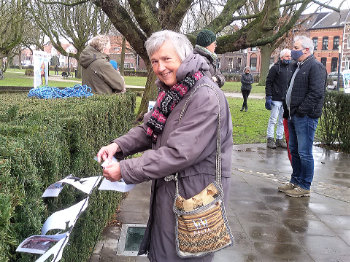 The event of the “Stichting `t Groenewold” in cooperation with the Jongerenkerk Venlo took place on Sunday, March 14, 2021, in the Juliana Park at the World Peace Flame in Venlo outdoors – Coronaconform.  The goal of this event is to reflect on the sad situation of large groups of refugees at European borders and to show politicians that there is definitely support for humane, refugee-friendly politics.

People of different nationalities animated and supported the sad situation of large groups of refugees with life testimonies, poems, silence, lighting a Peace Light or by cutting out a symbol of hope from the preprints of refugee pictures as a sign of solidarity with people who have fled.

Sr. Leoni Prigunta, SSpS, shared her five-month experience with the refugees in Athens. During her report, I could feel the concern and deep reactions of the participants.  The applause that followed showed how much the local people appreciated Sr. Leoni’s mission in Athens.

Another report drew attention to the „refugee politics“ and the „problems of refugees“ in the Netherlands. The report clearly showed the difference between migrants and refugees:

A young man from Syria, who has been living in Venlo with his family as a refugee for 5 years, reported how difficult and lengthy his path as a refugee was until, after many administrative obstacles, he was able to integrate to some extent and only with the help of kind-hearted Dutch people.

This action impressed me personally very much! I hope that our presence contributes to the fact that the problems of the refugees are heard; however, not only in the politics, but also with myself. Once again, the phrase “If you can help, just do it!” accompanies me.

“I Transmitted to Them the Smile of God”

I am Sr. Leoni, a Steyler Missionary from the Philippines and missionary to Brazil. From Brazil I was sent to Steyl for a special task to assist with the international renewal course of our Steyler missionaries.

Last year, due to the pandemic, our course was cancelled and that motivated me to go to Athens to join our sisters who are there working with the Jesuit Refugee Service.

Our Founder, St. Arnold Janssen, from the very beginning of our foundation, wanted us to work with migrants and refugees. Perhaps, because these people, uprooted from their country, are very fragile and vulnerable and easily break and die.

I am here to share with you my first-hand experience working among our sister/brother refugees.

Due to restriction measures, we are not allowed to go inside the refugee camp, neither in Lesbos nor Samos, the two big refugee camps in Greece.

When the refugees arrive in Greece, they are placed in the refugee camp. During this period, they process their papers to have a legal document as a refugee. Once they get the refugee identity document, they must leave the camp.  With the document they can find a job, rent a house, and rebuild their lives. A major problem however is verbal communication. They do not know the language of the country which is Greek and that makes it difficult for them to get a job.

During the pandemic, even without the refugee document, they are allowed to leave the camp. The overly populated camp is prone to the rapid spread of COVID-19. Many of the refugees seek refuge in the city of Athens. There is where we meet them. Thanks to the corona virus, some refugees were able to escape from the inadequate and chaotic conditions of the camps. They feel safer in the streets than in the camps. So, many refugees are scattered throughout the central area of Athens.

When I arrived in Athens, I was immediately brought to the park called Viktoria. There I saw many people sitting on top of their belongings, lying on the ground protected by cartons… under the shadow of the trees. That was during the height of the heat wave in Greece! Most of those who occupied Viktoria Park were from Afghanistan. They came from Moria Refugee Camp in Lesbos. 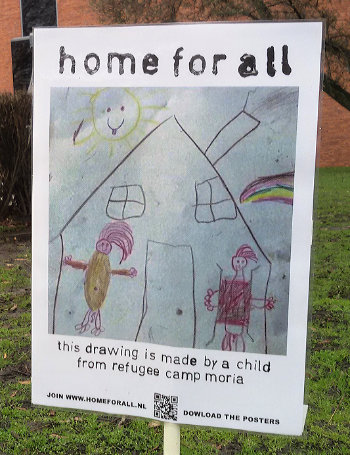 We Steyler Sisters are working in the Jesuit Refugee Service Center, located in the center of Athens. We have a Women‘s Day Center, a place where women and children can take a shower, wash their clothes, and get clothing. We ask donations of clothing shoes, towels, toiletries and other items from people.

Also, we have a center for Alphabetization. Here we help both children and adults who are interested to learn Greek, English and mathematics.

People come and go in the park. Every now and then, the police gather them and bring them to a place outside the city. Then, others come and again, they are collected and transported to another place. That was the scenario while I was in Arhens.

Almost every day we check in the park and see if there are new people coming and we inform them of our services.

We Sisters and lay volunteers, go to the park to do some activities with the children – playing, some paintings, and so forth.  There are plenty of children, lonely, squatting on the ground with their father or mother or relatives. Some children are without parents. When I saw them, they broke my heart!

We do not understand each other. At first, I was so desperate trying to communicate in the hope of making them feel better. After, I realized it was me who was not feeling better. Seeing the reality of the refugees, I was confronted with myself, with my helplessness. I wanted to help them, but how? It was a struggle not being able to help them. I was sorry to myself and for them. But, you know what they said? “My friend staying here in the park, sleeping on the ground is much better because at least here we cannot hear continuous bombing and shouts of terror. We don’t see our children terrified and trembling because of fear.

I would sit with the families in the park. Just being there, sometimes trying to communicate, but if we didn’t understand each other we just laughed. This helplessness made us close to each other and soon we began to feel at home with one another.

Throughout my stay among the refugees, my only wish was to get them to smile. When I could make them smile, it was already heaven for me!

The children, seeing us coming to the park, their eyes sparkled and immediately ran to meet us. We played with some and with others we did other activities like painting, paper folding, and teaching them to make toys. After the activities, we gave them chocolate, cold water or juice for refreshment. For a moment we made them smile and enjoy life.

The only richness I shared with the refugees was my presence and my whole hearted smile. The most rewarding experience I had was when I was able to make them smile. For me a smile is worth a thousand words. I did not speak with them about God, since they are Muslims, but I transmitted to them the smile of God. I made them feel the welcoming presence of God. I felt God was committed to the refugees through me.

Our Sisters who remain in Greece are giving their best for this mission among refugees.

I hope and pray that our presence among the people inspires them to continue to live and revive their hopes for a better human condition. I pray that we continue to commit ourselves to support our brother and sister refugees. May we be God’s refuge to accommodate these people who are forcibly uprooted from their land.

Sr. Antonia Schmid was born in southern Germany and has a master’s degree in domestic sciences and social management. She joined the SSpS Missionary Congregation in 1985 and from 1990 to 1993 she went to Papua New Guinea for a Crosscultural Missionary Experience (CCME). Since 2016, she has been the Community Leader for the Motherhouse SSpS in Steyl, the Netherlands. 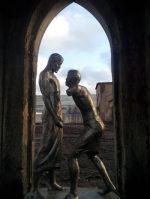