“Incarnation, resurrection and the spirituality of Arnold Janssen”

While still in the novitiate in Chludowo, Poland, I noticed that on the stamps of the pre-war books, our Congregation’s name in Polish was a literal translation from the Latin, “Societas Verbi Divini.” “Society of the Divine Word” in English is closer to the Spanish translation “Compania del Verbo Divino.” However, our post-war name in Poland is somewhat different. We did not call ourselves a “Society” but a “Congregation.” During the time of the war, the communist dictatorship distorted the meaning of the term “company and companion” in Poland.

Like many things connected with our Congregation’s foundation, the issue regarding our name was not simple. Although the Mission house was founded in 1875, our name’s question was not fully resolved until 1900. “Societas Verbi Divini,” as perceived in different languages, reflects somewhat differently the thinking of Fr. Arnold that his spiritual sons should be “Socii Verbi.” A commission at the Vatican had reservations about the name. The commission suggested changing the name to “Societas Cultorum Verbi Divini” – “Congregation of Divine Word Adorers.”

For Fr Arnold, however, this was not just a simple change of words. Behind the chosen name was a deep thought on a relationship to the Son of God. He “… by the power of the Holy Spirit was incarnate of the Virgin Mary and became man” (Creed), and became like us in all things but sin (Phil. 2:7; Heb. 4:15).

Therefore, Fr. Arnold did not want to give up this spiritual heritage that seemed very important to him. So, efforts were made in Rome to dissuade the position of the Vatican commission. Fr. Arnold was convinced that his spiritual sons are not “only” worshippers of the Divine Word. They are followers of Jesus, in everything like Him.

Fr. Arnold expressed his reflection regarding our name. It is in the present SVD Constitutions in the words of the Prologue: “We see our special dedication to the Divine Word and his mission expressed in our name. His life is our life. His mission is our mission. (Prologue of the SVD Constitutions) The Son of God became man. In his humanity, we want to go together with him, imitate him, and participate in his mission. The last Chapter expressed this with the phrase “our name is our mission” (no. 17).

The name of our Congregation is not the fruit of pure accident but of Fr. Arnold’s way of life, which began in his family home. The family recited the Prologue of the Gospel of St. John and the prayer of the Angelus. It was there that a deep relationship with the mystery of the Incarnation began to take shape in him. Later, among other things, this found expression in the introduction of the tradition of the procession with the Christ Child on Christmas Eve.

The Incarnation and the Easter Triduum

The Son of God, human as he was, is linked with the experience of suffering. In Fr. Arnold’s life, this was manifested in his frequent practice of the Via Crucis. This traditional devotion was how he tried to approach and live the consequences of the Incarnation.

Another form of devotion that Fr. Arnold recommended during Holy Week to enter into the mystery of the Incarnation was the “Passion Clock.” This practice consisted of remembering and meditating on the Passion of Jesus’s events during Holy Thursday and Good Friday. This “watch” began at 7 p.m. with the Last Supper and ended at 5 p.m. on Good Friday with the death on the cross and burial of Jesus. Just as the quarter-hour prayers were intended to help one live in the presence of God, the “Passion Clock” meditation was envisioned to help one live the Passion of Christ as part of the Mystery of the Incarnation.

“His life is our life”

The Son of God took our mortal body, shared our earthly life, died, but rose again. To be genuinely authentic in following Jesus, it is clear that our mission must necessarily be connected with the rejected, the marginalized, and those who suffer injustice.

In the novitiate, we had classes on the history of the Congregation with Fr Jozef Arlik. He spoke with particular emotion about Brother Grzegorz Frackowiak. They both came from the same part of Poland and knew each other. During the Second World War, Brother Grzegorz, to save others, denounced himself to the Gestapo-police and took responsibility for printing illegal leaflets, which was punishable by death. Brother Grzegorz was immediately arrested and sentenced to be beheaded. He died, but the others who were previously accused survived.

With his life, Brother Grzegorz joined the life of Jesus in suffering and death. Today we honor him as a martyr and a blessed.

The gift of the risen Christ: The Holy Spirit

In Fr. Arnold’s biography, we can read that his life and spiritual growth were divided into individual stages. From 1883 until the end of his life was the stage characterized by a deepening of his relationship with the Holy Spirit. This period’s significant event was his consecration to the Holy Spirit, which took place on October 3, 1887, in Vienna. Fr. Arnold was convinced of the Holy Spirit’s critical role in the spiritual renewal of believers and all missionary work, especially in the conversion of non-believers.

In the correspondence between Fr. Medits and Fr. Arnold, one can also find interesting information about the future of the foundation in Steyl. Fr. Medits wrote that this work would survive if there are an attachment and devotion to the Holy Spirit among the members of the Congregation. This devotion cannot be limited only to the daily recitation of the hymn Veni Creator or the celebration of Pentecost. Real commitment and openness to the Holy Spirit’s action are related to the care for purity of conscience and obedience to the Church and the superiors of the Congregation.

These are powerful words, especially in the context of our last Chapter. Much was said about our renewal and transformation. 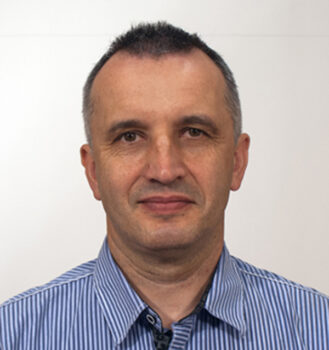 Fr Eryk Koppa was born in Strzelce, Opolskie, Poland. His first missionary destination was Mexico. After several years on the mission, he was sent for a BA in Moral Theology. At the end of the course he returned to Poland where he was appointed formator and prefect of the seminary, between 1998 and 2007. Besides being a formator, he was elected Provincial Councilor between 2003 and 2007. In the period 2007-2013 he acted as provincial secretary. He was elected Provincial of Poland in 2013 and General Councilor in 2018.