On the occasion of the 150th anniversary of the proclamation of St. Joseph as the Patron of the Universal Church, Pope Francis has declared a special year dedicated to St. Joseph beginning from December 8, 2020 to December 8, 2021.  With his Apostolic Letter, Patris Corde (“With a Father’s Heart”), the Pope invites all the faithful to avail the opportunity to commit ourselves to prayer and good works, and obtain, with the help of St. Joseph, the head of the heavenly Family of Nazareth, comfort and relief from the serious human and social tribulations that besiege the contemporary world.

During this special year, inspired by the example of St. Joseph, our patron and pattern of authentic faith, we, as SVD Brothers, are invited to rediscover our filial relationship with the Father, to renew our fidelity to prayer, and to redispose ourselves to listen and respond to God’s will in profound discernment.

St. Joseph as a model for religious life

St. Joseph placed his trust in the plan that the Lord sought to unfold in his life and in the life of his spouse, Mary. Except for Mary, he knew Jesus more intimately than anyone else. It stands to reason that when we go to St. Joseph, he will lead us into greater intimacy with his foster Son, Jesus.

St. Joseph is also a model of humility and poverty. He apparently possessed little, and he certainly didn’t focus on providing luxurious material comforts for his family. The people familiar to Jesus even identified Jesus by saying, “isn’t this the carpenter’s son?” (Matthew 13:55). They were unable to accept Jesus’ extraordinary wisdom and wondrous deeds because of his humble origin that he is the son of a simple, poor, and working-class carpenter.

“Joseph teaches us that faith in God includes believing that he can work even through our fears, our frailties and our weaknesses. He also teaches us that amid the tempests of life, we must never be afraid to let the Lord steer our course. At times, we want to be in complete control, yet God always sees the bigger picture” (Patris Corde, p.4).

God entrusted St. Joseph with the task of protecting the Incarnate Word and His Blessed Mother. So too does God offer St. Joseph to us as the protector of the Universal Church. Likewise, St. Arnold Janssen’s legacy of trusting in the intercession of St. Joseph was handed down to the Society. Many SVD foundations and institutions were entrusted to his intercessory protection even after the death of St. Arnold. We pray that St. Joseph’s intercession may help us to follow his example of selfless and tireless service to the Church.

St. Arnold had a strong personal devotion to St. Joseph and turned to him in various needs. Already in November 1874, he wrote the first article on the project of the new Missionary House in the “Little Messenger of the Sacred Heart of Jesus” which attracted the attention of some people and inspired their first donations to the cause. The needs were much larger and more urgent than the small offers that Steyl had received.

However, at the beginning of 1875, St. Arnold received an unexpected donation of DM 9,000 in the month dedicated to St. Joseph. The donation was like a gift from heaven from an unknown benefactor through the Poor Sisters of St. Francis of Aachen. St. Arnold sent a letter of thanks to the anonymous donor through the Sisters. For him it was a help mediated by St. Joseph. This donation made a decisive contribution to the purchase of a house with a garden and to start his missionary dream with the opening of the Missionary House on 8 September 1875. In his letter of thanks, the Founder mentioned St. Joseph three times as our affectionate intercessor with God. Whenever St. Arnold wanted to build something, he always asked the students to pray fervently to St. Joseph, our heavenly treasurer.

St. Joseph’s important role in the SVD was closely linked with the introduction of the Institute of Lay Brothers two years after the foundation of the Missionary House in Steyl. St. Arnold always treated them with special regard and called them “the good brothers”. In St. Joseph, he saw the model of modesty and simplicity of life for the Brothers and their just patron.

Taking this unique opportunity of being instructed by St. Joseph in “a direct way” during this year, let us turn to him and ask his guidance on the aspects that we need to work at this moment, so that we may be able to progress in transforming ourselves.

St. Joseph as a model for the SVD Brothers

Undoubtedly, as said earlier, one of the greatest inspirations of St. Arnold’s life was that of connecting Brothers’ vocation with St. Joseph as model and their natural patron. The feasts of St. Joseph were occasions of special celebrations. Often the novice Brothers were invested and professed their vows on the feast of the saint.

His inconspicuous figure marked God’s Salvation plan effectively as the Brothers did for the Society’s mission. St. Arnold speaks of St. Joseph as the patron saint of carpenters and cabinet makers. The carpenter of Nazareth has embodied the virtues of silent and diligent worker, outstanding in prompt obedience, steadfastness and fidelity in the entrusted task. These were the eminent and necessary qualities for St. Arnold’s new and thriving mission enterprise, so that the new missionary initiative could be successful and bear many fruits.

St. Joseph’s silence in the Gospels is a sign of the virtue of humility, a key virtue of our Religious Life. That he provided for his family as a carpenter is a sign of a faithful and skilled laborer, and of his understanding of the call and the dignity of work. Similarly, SVD Brothers are invited to develop skills to provide generously for the poor and the marginalized we serve. As a foster father, he guarded the Virgin and Jesus most directly. Brothers are called to the adoration of Jesus in the Eucharist, keeping watch for many hours daily. St. Joseph was called on to be a father – to provide, protect, defend, love, and shepherd his family. We, Brothers, aren’t biological fathers, but we are called to be spiritual fathers to many souls: the victims of sexual abuse and human trafficking, the refugees, migrants, and the homeless. It is these souls we are called to “father” as we provide, protect, defend, love and shepherd them.

Carpenter, St. Joseph enhances manual work which is often despised. St. Joseph sanctified himself by performing his work with competence and honesty. He sanctified his work putting the best of himself in a spirit of faith and prayer. It was in a discreet, daily and hidden existence that St. Joseph lived the intimate union with God. In this sense, he shows the way to holiness in ordinary life, to which all Christians are called.

In a similar manner, most of our Brothers handle very practical responsibilities necessary for taking care of the infrastructures and maintaining our communities and institutions in such roles and professions as receptionists, sacristans, engineers, architects, carpenters, doctors, mechanics, and so on. Their effort, work, compassion, charity and obedience lead them to be available for all kinds of services in humility and discretion. They all devote their own abilities to the service of God and the work of the Society. And all are expected to spread the faith through their interaction with people and by spiritual exchanges. They work not that they might receive exaltation or reward, but that others may encounter Christ, know Him and love Him.

The extraordinary story of SVD Brothers encourages us to marvel at their impressive accomplishments. The secret of these accomplishments seemed to be disclosed by Fr. Hermann Fischer in his book Mission Brothers, in which he states: “The quiet, faithful service of God filled their lives and gave their lives an imperishable value. Their greatness lies in their interior, in their quiet, strong loyalty to God” (K. Müller, The Renewal Chapters of the Society, 6).

During this ‘Year of St. Joseph’, with his intercession, let our being SVD religious Brothers rightly speak for us as men of God, men of prayer, men of action and men for others. Let us commit ourselves to witnessing to the presence of God in our lives and in the world. Let us reveal our identity more through example rather than lip service, and more by doing than defining. In short, let us promote and preserve human dignity and justice through our prophetic stance and professional expertise.

[1] Miotk, Andrzej, SVD, “St. Joseph: our Model and Protector,” A recollection preached to the members of the Divine Word College, Rome (Jan 2021), on the occasion of the ‘Year of St. Joseph’. 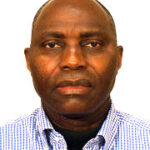 ———-
Brother Mazola Mido, Guy, a missionary of the Divine Word (SVD), is from the Democratic Republic of Congo. Former missionary in the Philippines and in his home country, he is now working in Rome as General Councilor.