Man of Prayer and Traveling Apostle, Promoter of the Apostleship of Prayer 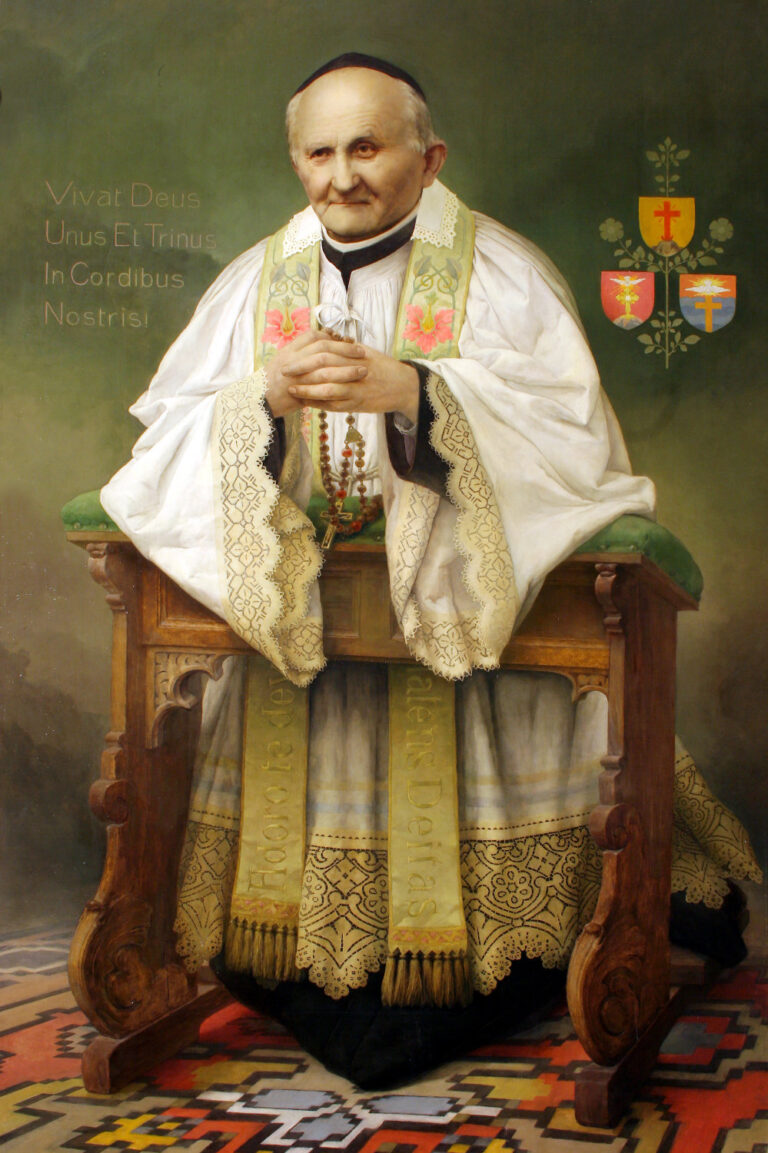 From the outset prayer had a profound significance in Arnold Janssen’s life, first in the example of his parents, later in the minor seminary and then during his university studies. As teacher and priest, his basic attitude was that of a man of constant prayer. It enabled him to see beyond his own human inadequacies, to be strong in the face of setbacks, and misunderstandings, to give up securities and to take up new challenges. The conviction that “it was not me but the Lord,” was the focus around which his life and activity centered – not only when looking back on achievements but also, and especially, when it came to accepting what, humanly speaking, had not succeeded.

The Apostleship of Prayer was founded by a group of Jesuit professors and students in the south of France in 1844. They aimed to lead ordinary people into prayer as a kind of school and training ground for lived faith. The Messenger of the Divine Heart of Jesus was an information bulletin sent to the members. The first issue of the bulletin appeared in June 1861, shortly before Arnold Janssen’s ordination. In April 1866 he formally joined the movement. His certificate of membership stated, “Arnold Janssen has been accepted as a promoter of the veneration of the Most Sacred Heart of Jesus and the Apostleship of Prayer.”

That was not enough for him, however. He related, “When the General Assembly of Catholic Associations of Germany was held in Innsbruck (Austria) in 1867, I went on a long holiday trip there. On that occasion I got to know Fr. Malfatti SJ, director of the Apostleship of Prayer for Germany and Austria. He asked me to take over the coordination of the association in the diocese of Muenster, and this I did. That same fall I visited the tomb of the Curé of Ars and the Industrial Exhibition in Paris. From then on I took special interest in the Apostleship of Prayer. … I faithfully used my holidays to promote the Apostleship in the diocese of Muenster. I was also confirmed as diocesan director by the diocesan authorities. I worked especially for an increase in the spirit of intercessory prayer so that people would offer their usual prayers, for example the rosary, for the intentions of Jesus. … The Apostleship of Prayer was introduced into almost the entire diocese of Muenster. There was hardly a parish priest whom I did not visit for this purpose.”

His activities to promote the prayerfulness that he himself lived so perseveringly turned Arnold Janssen into a “traveling apostle.” As soon as the school holidays began, he was constantly on the road, often on foot. By 1873 he had reached 300 of the 350 parishes of the Muenster diocese – and far beyond. To his printing press in Paderborn he wrote in fall 1872: “I have traveled for five weeks during these holidays to promote the praying of the rosary according to the method described on the prayer card (or some other method). The success of the project has led me through the dioceses of Cologne, Trier, Luxembourg, Metz, Strasbourg, German-speaking Switzerland, Augsburg, Munich, Salzburg, Passau, Regensburg, Mainz, etc.”

That indicates a further, decisive ability and activity of Arnold Janssen that he developed in the course of his service to the Apostleship of Prayer, namely writing and publishing. Immediately after his acceptance into the Apostleship, he published a small brochure in Duesseldorf entitled: “Association of the Apostleship of Prayer for the Practice of Intercessory Prayer to the Most Lovable Heart of our Savior Jesus Christ.” The booklet appeared simultaneously in South Germany and Austria. He immediately sent one home to his family stating, “I have wanted to write for a long time. But I was always waiting for this… Read and pray diligently with this lovely booklet. And read and pray again and again until you understand everything.” One year later there was already a second edition (circulation 15,000) now bearing the title, “Admission Booklet of the Apostleship of Prayer and the Fraternity of the Most Lovable Heart of our Savior Jesus Christ.” By 1880 four further editions had been published, bringing the total to 90,000 copies. Along with that, he also published another series of pamphlets and prayer leaflets, including an introduction to the rosary, that enjoyed widespread popularity.

Arnold Janssen’s constant underlying principle in all this was: in praying their customary prayers such as the rosary, people are to be guided toward an attitude of intercession, so that they begin to converse with God about the great and small intentions of life and of the Church, receive orientation from God and find the path to concrete and active love of neighbor. Naturally, Arnold Janssen was expressing himself in the theology and language of his times. At first it was the contemporary, popular Sacred Heart devotion, but that drew him more and more to the contemplation of the Triune God. In the spirit of that time, the great intention that moved him was the “return to the faith of the separated peoples.” Though somewhat ahead of his day and age, he saw this unity as a fruit of the action and grace of God, which we must ask for in prayer.

Here if not sooner, a different Arnold Janssen, now 33 years old, came to the fore. The man known in the school in Bocholt as “a man of prayer but not very sociable or approachable,” the man who spoke only in the classroom and occasionally in a less important church, had become a man of the public arena who knew how to put his message across both personally and through the media. If in former times he had not found it easy to reach out to others, now he had not the slightest difficulty in knocking at the door of any parish house in order to speak about and win people for the Apostleship of Prayer. He had no inhibitions about approaching bishops and dignitaries with his message. His extensive travels and the great diversity of his contacts and encounters broadened his vision and thinking far beyond the narrow horizons of Bocholt.

Arnold Janssen’s situation in those years appears rather complicated: on the one hand he was imprisoned by the frustrating, prejudices about him as a not particularly successful nor recognized mathematics teacher and on the other hand, he felt challenged and highly motivated and confirmed in his life and service in the Apostleship of Prayer. On the one side, there was the security of his teaching position that apparently did not fulfill him, on the other side an insecure existence in the service of a task that he began to see more and more as his own.

A decision was finally provoked in 1873 through a conflict with the school board in Bocholt. It concerned a statue of the Madonna that Arnold Janssen himself had acquired as early as 1868 and wanted to set up in the school hall. It was a Catholic school but there were also Protestant and Jewish pupils. There were arguments this way and that between the school board and Janssen regarding the statue. In this connection, he requested the bishop of Muenster in 1870 to free him from the school so that he could devote himself to purely religious activities. At that time, the bishop refused. But not so in 1873. By that time the Kulturkampf was well and truly underway. In the new German Empire under Prussian leadership, the activities of the Catholic Church in schools was drastically limited at the end of 1871. There was definitely no place for a statue of the Madonna. Arnold Janssen stuck to his guns – and handed in his notice in March 1873.

From Mission Periodical to Mission House

Arnold Janssen fulfilled his school obligations until the end of the academic year 1872/73. Then the 36-year old was free to begin a new phase of his life. In October 1873 he took a position as house chaplain for the Ursuline Sisters in Kempen who ran a boarding school. That gave him the necessary free time to do even more for the Apostleship of Prayer. In July 1873 he described his situation as follows: “I would have been prepared to make even greater efforts for that [the Apostleship], even to commit myself totally to this holy task, and to place all my strengths and abilities, even my life, at its disposal if only it could have moved the thrice holy and good God to pour out the Spirit of grace and prayer more richly on the world.” But he wanted to put into practice an idea that had already developed in Bocholt, “to publish a popular monthly periodical for the promotion of prayer and participation in the great intentions of the Divine Savior, especially the propagation of the faith.” With his customary thoroughness he set to work. His publishing experience stood him in good stead, as did his extensive contacts and relationships won through his activities for the Apostleship of Prayer. Already in January 1874 the first issue of his periodical, the Little Messenger of the Sacred Heart, was published. The title was taken from the Apostleship bulletin with the addition of the word “Little.” In the beginning Arnold Janssen had to pay for its publication from his savings. He described the goal of the magazine as: “The principal, if not the sole, goal of the undertaking is to inform people about the Catholic missions at home and abroad in a readable and interesting manner.” However, it quickly became apparent in the following issues that it was to be a magazine that mainly dealt with the “missions abroad.” In those days the term used was “pagan missions.” On the title page of the June issue there appeared for the first time Arnold Janssen’s emblematic prayer: “May the divine Heart of Jesus live in our hearts.”

The Spirituality of our Society. A Theological Appreciation 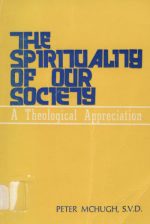 Triduum in preparation for the Solemnity of the Holy Trinity 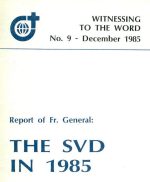 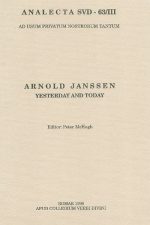