Arnold Janssen and God’s Will 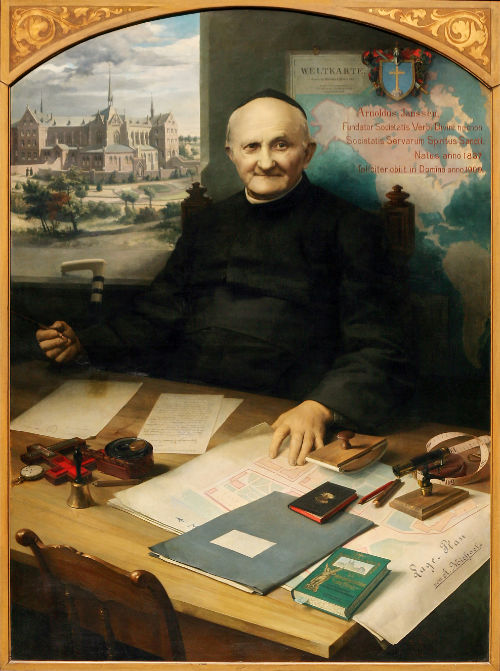 PrevSt. Arnold Janssen´s Veneration to St. Joseph
God’s Blessing for Missionaries in the School of the CrossNext

Fr. Arnold Janssen was guided by profound faith, and he endeavoured to fulfil God’s Will honestly all his life. This unyielding and uncompromising pursuit of God’s will was the keystone of his inner life and the source of his unshakable trust.

The keystone of the Founder’s spirituality

Many would dwell on Arnold’s devotions, but the real foundation, deepest and truest layer of his spiritual life (Bornemann), was the continuous effort to fulfil the Will of God, “to make his wishes conform to those of the Heart of Jesus.” This is the recurrent motif running through the Founder’s correspondence for three decades. In his obedience to the Holy Spirit, he found a way to discern the signs of the times. The Will of God was the way to true Happiness and the shortest route to perfection. “God’s Holy will alone” is the title of the Founder’s thoughts compiled by Bro. Ewertz. The work captures the gist of the Founder’s spirituality accurately as conveyed in the formula for the profession of vows in the Society: “I will seek only the honor to be insignificant in my own eyes and the eyes of the world.” Therefore, against his feelings but after having recognized the Will of God in the concrete circumstances of life, Fr. Arnold ventured to set up the Mission House. For many, he seemed to be the wrong person, with little capability, plain and with poor oratory skills. Yet, following the Will of God he achieved remarkable things. His strong conviction was: “If God wants the work, it will succeed,” so “The Will of God is done.” He noted that if we are in harmony with the Will of God, then we are strong since God’s ways are not at all like the ways of men (To Freinademetz, 18-20.03.1900). He learned discernment from personal experience and felt the need to grow into this capacity even more due to the ongoing expansions of his foundations. Being aware that the Will of God is above worldly enticements and human greatness, he strongly advised the superiors to practice the gift of discernment.

The Founder’s dealing with the Will of God reveals certain methodical features as seen in two striking peculiarities. First, he applied an almost scientific approach, examining the empirical facts, circumstances of people, places and times; second, he was keenly interested in reading the lives of the saints to get insights on how God works with those who search for Him with their whole hearts. Fr. Arnold yearned for information and his decisions were based on acquired knowledge. A result of this was the practical guidelines for new priests (Collegium practicum in Saint Gabriel since 1900). His insightful study endowed him with a high degree of wisdom and foresight. One could call Fr. Arnold a strategist of the Will of God at his working desk. This image was portrayed in a painting of the Founder by Bro. Lucas Kolzem (1934) at the wish of Fr. Josef Grendel, Superior General. Fr. Arnold reported: “A study of what deserves consideration costs me many hours.” Arnold Janssen usually did not rush to come up with something new. He took his time for things to develop and to mature, giving them the opportunity to open themselves up in their various aspects. He also sought out knowledgeable people for more insight. He would read articles and notes to assess upcoming tasks like new foundations or assignments further. To give clarity he weighed up the advantages and disadvantages of various requirements, comparing and making out what is the Will of God to be followed. “I draw only the conclusions from things and circumstances, but it is God who makes things and circumstances.”

The right people in the right positions

The old constitutions underlined the Society’s obligation and task to recognize the Will of God, especially by putting the right people in the right positions. “If, however, the superior is found to be opposing God’s will by his own, God will either get him to change his mind or else remove him from his position.” The members of the Society are to adore the will of God in the appointment of the superior, to whom they should be subject in all confidence (Const. 1898, 78/1). The Constitutions 1898/125 d also cautioned that: “A proud man, ambitious for honors, only increases his pride upon the reception of the office and suffers harm to his humility. And the Society will have hardly any blessing from his office, but rather much loss.” Fr. Arnold believed that: “Should God demand any particular task from us, he knows it long in advance, and he also sees to it that the right people will be available to us.” (Janssen to Colling, 23.06.1904)

Some insights for discernment

– The guiding principle in the Founder’s inner life was to always set his eyes on God’s Will, and that keeps you from restlessness when you run into difficulties and from excessive haste and excessive cleverness, inasmuch as we believe that we have to prevent this or that. Patience and trust in God protect us from unbridled zeal and from jumping the gun before the right moment has come when all of the difficulties will disappear. (To Colling, Steyl, 18 February 1901)

– When Deacon Wegener was considering his vocation to the Society, Fr. Arnold said: “I advise you not to consult too many people. That will only confuse you. There is no assured way of knowing the will of God in this life.”

– Faithfulness to one’s vocation and duties is the ordinary way to fulfill the Will of God. – Make obedience your guiding star in all simplicity and sincerity. For Arnold the will of God and religious obedience were taken as one: “though the Superior should not be so harsh to think that every command he gives corresponds to the Will of God, it is nevertheless God’s will that the subjects obey. God will never allow them to suffer harm when they are on the path of obedience and in agreement with the will of the Superior.”

– A good decision requires complete dedication, time of preparation to get as much good and reliable information as possible, and then to proceed prudently by keeping the primary goal before your eyes. – Fr. Arnold advised: “Make as a rule of life to distrust any idea that is putting a certain amount of pressure on you” since the evil spirit tends to influence people with a certain amount of pressure and great powers of persuasion.

– Fr. Arnold was blamed for being slow in decisions, but that was the price he paid for good decisions. Some decisions simply have to be taken one step at a time. One needs to get the bigger picture to judge properly and not underestimate the difficulties. God has his own time, and it is no use to hasten things. “If you receive an important letter, do not respond right away but let the matter rest for one night.”

– “If you are not clear about important things, don’t get involved with them.”

– “I do not write the first words that come to my head. I always reflect carefully without bypassing the facts, and so things cannot be changed without good reason (…). As a rule, I do not proceed till I have a clear idea of God’s will.”

– The instrument must first reach the appropriate age and have sufficient experience before the Lord God calls out for the work willed by Him. When selfish love is in play, it is necessary not to act on the matter at once but to postpone any decision until you have achieved some calm. Fr. Arnold not only frequently quoted from Heb 10:7: “Here I am, I have come to do Your will, O God” but he tried to practice it in his life. On his departure from this life, he exemplified it through a complete resignation to God’s Will. The Founder’s life calls the Society as a whole and his sons and daughters to strive to discern and to fulfil the will of God faithfully. This is the road to our greater sanctification so that the Society as a whole will be ever more capable of being an instrument of God.

The Arnoldus Family Story, Vol.4, No.3 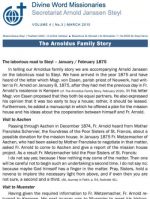 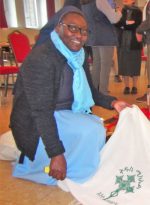 May the Holy Triune God Live in our Hearts and in the Hearts of all People! 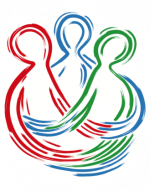