The SVD Motto Prayer: The Mission of Light Against the Darkness 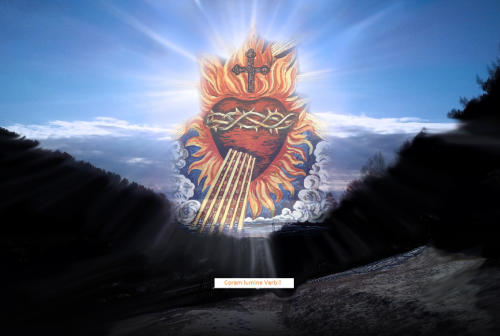 PrevThe Century of Women
Exhibition of “old Masters” in the Mouther house, SteylNext

Among the treasure of prayers in the Society of the Divine Word there is one prayer of incomparable significance. This is our motto prayer “May the darkness of sin and the night of unbelief vanish before the Light of the Word and the Spirit of grace, and may the Heart of Jesus live in the hearts of all.” This motto prayer mirrors Arnold’s genuine spiritual experience and indicates the purpose of the Society since the early days of Steyl.

Our Founder saw the Society’s mission through the prism of Light and Darkness based on the Prologue of Saint John. The Divine Word is longing to be born in human hearts so that all people may become more and more daughters and sons of God. This is portrayed as a dramatic struggle between Light and Darkness. Fr. Arnold rendered this constant tension in a beautiful motto prayer for his missionaries and he placed his life and work under its protection.

Father Arnold contemplated the Prologue of St. John as a magnificent and a unique epiphany of Divine Light, starting with the act of Creation and reaching its dramatic climax in the Incarnation. Fr. Heinrich Stolte, the last private secretary of the Founder, often found the late Founder seated before a huge atlas, poring over it “simply studying the countries not yet illuminated by the light of the Gospel.” (Remembering Arnold Janssen, AN-SVD/42, 45) Already in 1874, Fr. Arnold, following the intentions of the Sacred Heart, felt that Jesus was interested in a special way in the fate of 555 million Chinese in the most populated country of the world. He thought of the Divine Word illuminating every human being who comes into the world and desired to send missionaries “to achieve power to bring God’s love into the night of paganism and into the loveless and dark kingdom of these poor souls.” (“Little Messenger of the Sacred Heart” (HB), May 1875, 39)

Historical traces of the Prayer

In the early 1870’s, around the time of Arnold’s plans to start a Mission House, Saint John’s thoughts had a decisive influence on his spirituality. This was disclosed in his simple poem published in the HB, 1874, 11: “In order to save and instruct me, O Light, you burst into our night. I want to faithfully listen to your Word, which you, O Lord, have brought to us.” In the same issue of the “Little Messenger”, he wrote: “You (the pagans) are children of darkness, we are the most joyous children of the light. May we allow the light to rule in us and become stronger and stronger and gradually banish that darkness.” The first formulation of the prayer was different: “May the sweet light of the Divine Word shine in the darkness of sin and the night of heathenism” (HB, 1876, 24). The prayer concluded the solemn consecration of Fr. Arnold and his companions to the Sacred Heart on June 16, 1875, and afterward this prayer was always added to the vow formulas.

Already in 1877, Fr. Janssen reported in his magazine that the members of the community in Steyl said this prayer several times a day (HB, 1877, 88). This initial prayer was different in two ways. At first, it only spoke of the Light of the Divine Word without mentioning the Holy Spirit and was more piously worded by using “May the sweet light.” However, this prayer was changed in 1885 during the First General Chapter. The prayer acquired its present form due to a deeper theological grasp of the relation of the action of the Word and the Holy Spirit. Since then, the invocation has mentioned the Divine Word along with the Holy Spirit. On March 25, 1885, at 6:00 PM, the four capitulars in session unanimously adopted the present wording of the prayer: “May the darkness of sin and the night of heathenism vanish before the light of the Word and the Spirit of grace.”

As for the second part of the prayer: Et Vivat Cor Jesu in cordibius hominum, it was initially of greater importance and used earlier than the first part (March 1875). Only from 1876 do we find these two parts joined together, though in an inverted order. The second part of the prayer, based on the mysticism of St. John and St. Paul, is closely related to the biblical wording from Gal 2:20: “Christ truly lives in me.” This was probably inspired by the French school of spirituality, specifically by two saints related to this school: St. Francis the Sales and St. Grignon de Montfort. They seemed to have exerted an influence on Arnold through their writings.

The SVD Motto Prayer reflects an apostolic orientation of the Society and the Founder’s deep rootedness in the Holy Scripture and the tradition. The invocation of two distinctive parts is rich in inspiration and can be explored both through its Trinitarian and Christological readings.

Trinitarian reading of a prayer

The first part of the prayer is based mainly on the Prologue (John 1:1; 1: 4-5; 1:8-9; “full of grace and truth” 1:14) with references to other biblical authors, e.g., the expression “Spirit of grace” is from the Prophet Zacharias (12:10) whereas the expression “night” comes from St. Paul, who frequently used it in conjunction with “darkness” (1 Thess 5:5). The prayer places the two Divine Persons, the Divine Word and the Holy Spirit, at its centre. Through these two Persons, the inner life of the Trinity is poured out for the salvation of the world that is vastly ruled by cruel and exploitive mercilessness. In these two Divine Persons, we are to adore the Father and contemplate the mystery of his compassionate Love.

The light of the Word (Logos) is the inspiring and life-giving love. Therefore, missionaries have to implore frequently the light from above which is the light of Light, going out from the Father as the reflection of his beauty. “To save us and to teach us, you came to us as Light in our night” (God´s Holy Will Alone, Steyl 1995, 102). In Arnold’s life, the more in-depth understanding of the Divine Word was joined with the rising devotion to the Holy Spirit, the Spirit of grace. The inner exchange of love between the Father and the Son breathes love (gratia). The Spirit of grace is the undeserved gift of God’s love for the world immersed in the darkness of sin in its many shades. This world is to be penetrated and animated by the working of God’s grace using the sacramental activity as well as the word and example of missionaries. This cold and fruitless darkness, lacking warmth, is all around us. This is experienced in public opinion, in the culture, in the sciences and the arts, among others. The Missionaries of the Divine Word are called to be instruments of the divine light. They bring light into various realities of darkness by their engagement in the apostolate of the press, scientific research, and teaching. As the missionary work is entirely supernatural, it needs to be done in a spirit of most profound humility.

However, “since the darkness of sin and unbelief are essentially located in the heart of each person, the Word of God and the Spirit of grace must fill these hearts and rekindle them from within. Our primary goal of proclamation can produce fruits of faith only with the assistance of the grace of the Divine Word. The Messengers of the Divine Word mean nothing by themselves, provided that they are not assisted by this Word coming into the world to enlighten every man. Therefore, our proclamation has to be done in the power of the Word which is eternal light. Aside from the proclamation, despite initial opposition, Arnold left the Society the cultivation of sciences at the service of proclamation. Thus, the teachers of the Society are to venerate the Word, the source of light and knowledge, to draw on “the uncreated wisdom from which all light proceeds for human wisdom.” This Divine Light provides us also with insight into our nature, to get to know our true identity, to be fully of what we are as wise missionaries and to achieve happiness by following God’s call “in the light of the Word and the Spirit of grace.”

Christological reading of the prayer

In the second part of the prayer, the light of the Word and the Spirit of grace dwell in their fullness in the Sacred Heart. Thus, the entire Trinity dwells in the Divine Heart, which is the most profound and mysterious abode of God among men. It is a mystical presence of Christ in his Church and its members. Let us listen to the beautiful explanation from the First Rule: “Wherefore, the members should see in the most Sacred Heart of Jesus not just the Heart of Jesus but the Heart of the entire Church, called the Heart because, through the Holy Spirit proceeding from it, it gives life to all and unites all with itself. May they find refuge in this sanctuary of grace and love to draw forth from it the waters of the Holy Spirit for themselves and the entire Church, and especially for those whose spiritual care is entrusted to them or will be entrusted in the future.” (Rule 188/S, 8,8/416)

The life of our heart is nothing else but the presence of the Divine Word and the Spirit unfolding in the hearts of all, growing and producing fruit. The Founder often repeated the prayer for the seven gifts of the Holy Spirit, which opens us to the divine activity and surpasses the natural desires of human beings. He harboured a desire to express his religious thoughts visually, and for this reason he commissioned a painting of the Sacred Heart by Franz Commans (1837-1919), an artist from Düsseldorf. The painted image was widely disseminated on booklets, leaflets, and the magazine. The artist, following the instructions of Fr. Arnold, presented the Heart of the Lord surrounded by thorns with a cross above it and between clouds and from whose wound emanate rays of light and small tongues of fire. May the sweet light of the Divine Word enlighten us, was Father Arnold’s ardent wish. The tongues of fire bursting forth from the heart pointed clearly to the Spirit of Grace. The image demonstrates that long before Fr. Arnold became an “outspoken and zealous worshiper of the Holy Spirit he recognized the riches of the graces of the Sacred Heart of Jesus, and he always saw in it the fullness of the graces of the Holy Spirit.” (A. Rohner, Coram Lumine Verbi, AN-SVD 63/III, 199) The deep meaning of the motto prayer emerges from the concise explanation given by Fr. Medits to the first novices in Steyl: “We ask the Holy and Triune God to let the light of the eternal Word shine on the hearts of all and the power of the Holy Spirit to act in their hearts to prepare for the triumph of Christ and to help bring it about.” (A. Rohner, Coram Lumine Verbi, 200) 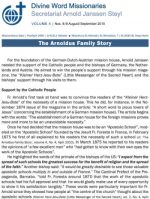 In search of the Gospel of joy, justice and peace!

The Arnoldus Family Story, Vol.8, No.6 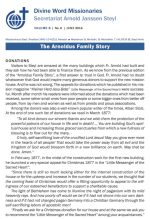