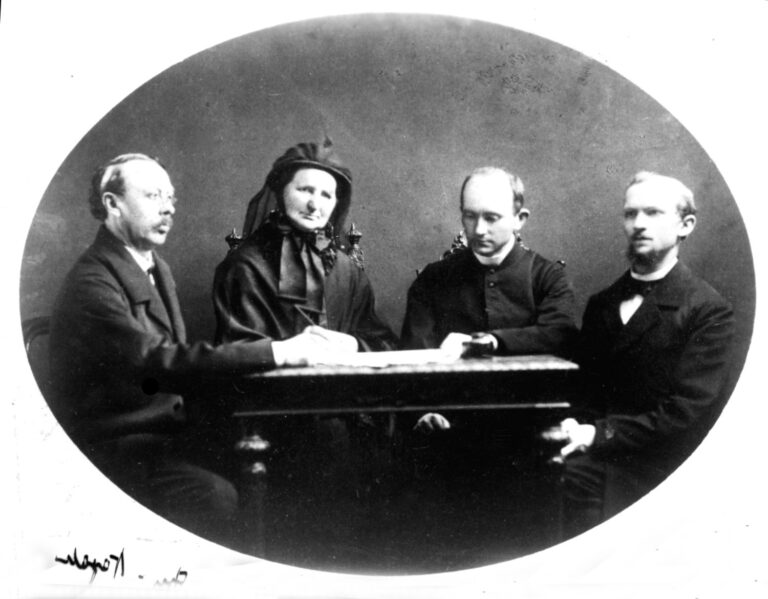 PrevOur Life of Prayer
Why should we remember our deceased confreres?Next

At times one can get the impression that ‘prophetic dialogue’ is a totally new concept and a new ‘cool’ word to describe our mission today. Yet when we look more closely at the life and work of Arnold Janssen, we find that he was a model of prophetic dialogue in different ways. The last general chapter SVD shows that “prophetic dialogue entails a recovery of what is characteristically an SVD way of doing mission” (In Dialogue with the Word, no. 6, 2006, p. 8), beginning with Arnold Janssen himself.

It was his faith in the Triune God that led Arnold to be open and attentive to the world’s needs, which in turn influenced and shaped him and gave our congregations its characteristic missionary thrust. From the very beginning, Fr. Arnold understood mission as God’s ongoing dialogue with humanity.

Though he was timid, reserved and rather clumsy in interpersonal relationships, he nevertheless found ways and means to express that which echoed deep within. It is this power to discern and ‘connect’, more than anything else, that authenticates Arnold’s spirituality. This is only possible when one learns to relate or dialogue meaningfully: with self, others, creation, and God. Let’s have a look at some of these instances of dialogue by our Founder.

With self: Fr. Arnold was in touch with himself, aware of his rough character and difficult personality. The sting in his personality put at risk relationships and friend-ships. When his secretary mentioned to him some critical remarks and comments made about him, he asked Fr. Gier to write down the comments he heard. Little did he think that Fr. Gier would take him so seriously and a few weeks later he handed Fr. Arnold 54 small pages of negative criticisms. Fr. Arnold made special efforts to improve. He prayed each day after Mass for “the grace to understand how a wise father or the heart of a mother ought to be towards my subjects” (J. Reuter, Proclaiming the Word in the Power of the Spirit, p. 71-72).

Arnold elicited admiration, but he also evoked antagonism. He disturbed many; and frequently this happened through apparently contradictory behavior, rather than through preached word or inspirational action. To many of us, Arnold remains an enigma, a maverick and often a nuisance. Dialogue and engaging with the real issues involve exposing vulnerability, beginning with Arnold’s own vulnerability. Poorly equipped for the task ahead, Fr. Arnold touched painfully the reality of who he was: His great desire to share God’s love with all people contradicted his obvious talents. His vision was blurred by many negative reactions and the impossibility of such an enormous task, made more difficult by being at the wrong time in history due to the Kulturkampf. In his inner struggles he touched deeply his humanity in his weaknesses and limitations, yet he set out into deeper waters. Arnold allowed himself to be vulnerable, rid himself of all defenses and opened himself to the possibility of ridicule and failure, of being dismantled of personal pride, being hurt, rejected and misunderstood. He surrendered himself in dialogue with the Word.

With others: Fr. Arnold read the signs of the times in a provocatively challenging and disturbing way. He had the inner freedom to listen deeply and the outer initiative to respond in new and fresh ways. From this perspective, Fr Arnold teaches us that dialogue is a way of being present in history, dialogue is not being passive; rather it is being courageous, restless, taking initiative. Arnold had this daring spirit even to the point of discarding all that which does not produce life in abundance. In those early days his involvement in the Apostleship of Prayer led to his awareness of the wider world. In the language of the Apostleship of Prayer his intentions became one with God’s intentions or “the intentions of the Most Sacred Heart of Jesus.” While the German Church became caught up in itself and in its own crisis due to the Kulturkampf, for Arnold this was the Spirit prompting it to look beyond itself to the needs of the wider world and thus a new mission was sensed, which led to the opening of the first German/Dutch mission house. “We live in a time when much is collapsing, and new things must be established in their place.” (Arnold Janssen to Archbishop Melchers of Cologne, 1875)

Arnold was a man of dialogue, dialogue with the world and dialogue with God. “People can serve God and still dedicate themselves to concern for worldly matters.” There was no contradiction for Arnold, both were held in creative tension, and this led him to be open to the Spirit and to risk relationships. He showed his enthusiasm for mission, cultures, and languages in the way he handled requests from new mission countries. His secretary recalled how he would spread encyclopaedias and maps over the floor in order to learn all he could about the country and culture from where the request came. In his vulnerability, Arnold could choose freely: to be open to others, no matter who that other was, to stand firm in his convictions amid controversy, to risk his voice or action even though there was the possibility of being misunderstood, rejected, or laughed at even among his own, to share his faith and vision even though he might be questioned or criticized, to risk failure, thus discovering his giftedness and potential.

With creation: Fr. Arnold helps us to recognize that what gives real meaning to life are things we often dismiss as being of little value. For example: the sacredness of our created world. We must remember that the first WORD spoken by God was creation in its beauty and diversity (Prologue of John). This is our passion for life.

As a teacher of natural science, he discovered God in all things and beings and all things in God: “In spring we see how the plants, beautifully formed, sprout from the dark, dirty soil and soon stand before us in all their colorful beauty and with sparkling, affectionate eyes gaze at us like messengers from God. Where do they come from? The finger of God, the Holy Spirit, is at work here.” Awareness of God’s presence and openness to the Spirit is the key to his spirituality, for at the core of Fr. Arnold’s spirituality lay the mystery of the Blessed Trinity. This was the basis of his union with God, his love for people, and his missionary enthusiasm. It involved every aspect of his life and became a deeply personal relationship to God as Father, Son and Spirit; “we in God and God in us.” Everything spokes to him of God, and God spoke to him in everything. Thus, his life was one of constant discernment and dialogue. The thousands of letters that he wrote speak for themselves; he remained close to all his sisters and brothers in the missions and supported them constantly. “Obviously the ‘spirit of the Founder’ is profoundly Trinitarian. It is rooted in the Founder’s great devotion to the Holy Trinity. For, the dialogue of life and love within the Trinity is the giving of one’s all to the other” (‘A Word from Fr. General,’ Arnoldus Nota: Jan/Feb 2007).

With God: Through his devotion to the Holy Trinity Arnold sought to safeguard and foster the spiritual and more holistic values that underpin life in its fundamental meaning. Dialogue is to be as inclusive as possible and challenge all movements that veer towards exclusivity. Arnold’s vision of God and the divine plan for creation led him to perceive in depth through dialogue. He strove through discernment to see the whole picture as God sees it, and the contradictions which others find irreconcilable he held in creative tension. It is the unity of all reality, the whole which is greater than the sum of the parts, that engages the person of dialogue.

When weary of life, Arnold sat down by the well of life and in moments of intimacy and prayer God became his rock, his meaning, his courage, his all in all. “Meditative prayer is not a time of sterile, cold reflection; rather it should be a heartfelt, loving dialogue with God.” He discovered that only in unshakable trust and total surrender into the hands of God could his impossible dream become a reality. In those vulnerable, yet graced moments, Arnold faithfully used the potential that God had invested in him, never counting the cost. His weaknesses became his strengths and today we are gifted by the ordinariness of this man. Most importantly, to be vulnerable is to know the paradoxical power in surrendering ourselves to God. It is to allow the power of God’s Spirit to take over and to move through us. It is to know that by ourselves we can do nothing, but with a surrendering heart we can do all things in the one who wishes to grace us every moment of our lives, so we can become a blessing for others as Arnold has become for each one of us.

Published in “Precious is the Life given for Mission” – Centennial Reflections 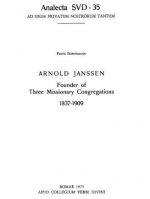 The Mystery of Divine Love in the Symbolism of the Upper Church of St. Michael, Steyl 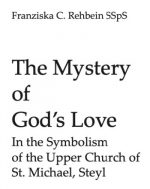 The Arnoldus Family Story, Vol.2, No.1 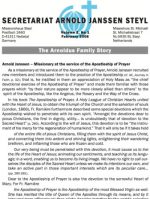 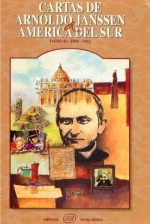